Consistency remained an issue for Bologna in February. With two wins and two losses, they remain in 12th. Here is our monthly review:

Another month has gone by, and Sempre Bologna will as always provide you with our monthly review. Here, we summarise each game, pick out any stand-out performances, and look at how Bologna have performed as a team. We’ll also look at any players that may have performed worse than what’s expected of them.

Going into the month, Bologna were sitting in 12th. After a month of two losses and two victories, Bologna still find themselves in 12th, but only two points behind tenth. Here is a breakdown of each match the past month:

The month started with the derby dell’Appennino. The first two goals were of the rare kind, as both Erick Pulgar and Jordan Veretout scored directly from a corner. In the end, Fiorentina wonder Federico Chiesa decided the match with a brilliant solo goal. Bologna struggled throughout the match as they lacked any real conviction going forward. The passing was abysmal on the day, which made it easy for La Viola to win the ball back, and subsequently have possession. The game was the first without Simone Verdi after his injury against Napoli, and the game served as evidence to how important the former Milan player has become for Bologna.

Bologna lost deservedly against Inter in the second game of the month. Inter took an early lead through Éder, but Rodrigo Palacio managed to equalize for Bologna after an error in Inter’s defence. However, Inter dominated from that point, and young prodigy Yann Karamoh decided the game with a long-range shot. As was the case against Fiorentina, Bologna struggled going forward, with Palacio being the only one who caused trouble for the opponent. Still without Verdi, attackers like César Falletti, Felipe Avenatti, Federico Di Francesco, and Riccardo Orsolini failed to make an impact, while midfielders like Blerim Dzemaili and Andrea Poli did not manage to make a contribution going forward.

The third match of the month saw Bologna finally returning to winning ways in an Emilia-Romagna derby. Contrary to the two previous games of the month, Bologna started the game in a brilliant way with incisive passing and smart movement. Sassuolo could not keep up with the tempo that Bologna set, and the home side got a deserved early lead thanks to Andrea Poli. The first half hour of the game was among the best attacking performances by Bologna for quite some time, and they should have been leading by more than one goal when Sassuolo equalized seven minutes from half-time. The goal encouraged them as they for the remainder of the half as well as after the break controlled the game. Bologna were pressed back at times, but Sassuolo never managed to take advantage of this. Then, with two minutes left of the game, Pulgar decided the game with a brilliant free kick.

The last game of the month saw Bologna face a team in good form who most recently had beaten Inter. Roberto Donadoni opted for a 3-5-1-1 formation, and this made Bologna much more secure at the back than they had been prior to this game. The first half was one of the most boring 45 minutes of football this season though, as the two teams cancelled each other out. After the break, a lucky, early goal by Mattia Destro forced Genoa to change their approach to the game, and Bologna subsequently got more space going forward. Despite Genoa pressing for an equalizer, they never really troubled Bologna, very much thanks to a hard-working team, and astute defending. Bologna finished the match off with a brilliant counter attack where Falletti got to score his first Serie A goal thanks to an unselfish Destro.

this month. The striker started the game against Fiorentina but was taken off after a good hour. He was then benched against Inter after rumours about his level of determination, with Donadoni talking about the need for him to work harder. After the Inter game, these claims were denied by Destro’s agent, as well as the coach saying that he did not have any problems with him. He returned to the line-up against Sassuolo, and put in a good performance. Whilst he did not score, he worked hard, won headers, and played the full ninety minutes. He then built on that performance with a man of the match performance against Genoa with a goal, an assist, and an overall hard-working display. He stood out as a true leader in that game, and if he continues like this in March, then he’ll be one of the first names on the team sheet for Donadoni.

César Falletti contributed more than he’s done before, and I’m left with a positive 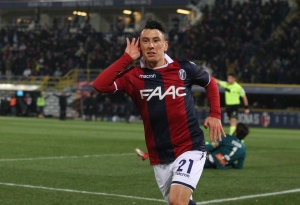 impression of him. He hasn’t played a lot this season, most likely because of the big transition from playing in Serie B to Serie A. Much like what was the case with Di Francesco last season, he has had to wait for his chance, but it now seems as the coach trusts him more. The attacking midfielder came on for the last 25 minutes against Inter, even when Donadoni could have opted for Destro. That cameo was followed by him starting the next game against Sassuolo. Bologna started that match very bright, with Falletti contributing to this dominant period of the game. Although he did not contribute to any of the goals, he got 54 minutes on the field. Last but not least, he got to play the last half hour against Genoa as Bologna chased the second goal of the game. Even though his goal was the result of an unselfish Destro, he did play a part in the counterattack, and he can be proud of his overall performance. If he keeps on developing like this, then Donadoni will have a difficult time picking his team in March.

WHO DID WE EXPECT MORE FROM?

The consistency of the team should have been better this month. As often is the case for Bologna, consistency remains an issue. The first two games of the month were horrid, with lack of movement going forward and subsequently few chances, as well as appalling passing. The games against Fiorentina and Inter were followed by two strong games against Sassuolo and Genoa. One never knows how Bologna will play before a game. Although the opposition was considerably stronger in the first two games of the month, Bologna should still have put in better performances, and not made it as easy for the opponents. If Bologna are to climb up to the upper half of the table, they need to be more consistent.

HOW DID THE TEAM PLAY?

The two games that were won saw Bologna deliver one of the best defensive performances (vs. Genoa) and attacking performances (vs. Sassuolo for 30 minutes). Bologna completely dominated Sassuolo for the first thirty minutes of the game, and could have led by three goals when they eventually equalized a few minutes from half time. For Bologna to then go on to the next game, and deliver one of the best defensive performances of the season was quite impressive. Donadoni’s decision to go for three at the back worked wonders, although the entire team worked very hard to deny Genoa space. It will be very interesting to see if the coach continues with three at the back, as the kind of defensive security that was shown in that game would be very good to have against all teams.

WHATS NEXT? LOOKING AHEAD TO MARCH

March consists of four games. The first sees Bologna travel to Spal, a game where a win is very much achievable. Then, Bologna will be paid a visit by Atalanta, before they travel to Rome to face off against Lazio. The last game of the month is at home versus Roma. Spal should end with a win, while the game against Atalanta is also winnable, especially given Bologna’s recent home-form. The game against Lazio will be very tough, as will the following game against Roma. But, if Bologna win the first two games in March, and go into the games against the two Rome-teams with confidence, anything is possible.

What did you think of Bologna’s results in February? Let us know in the comments!